Ruin is more than music, or at least aspires to be.  Initially, it was a propaganda project . Students of the arts, philosophy and religion, doing lab work with music. Experimenting with a way to be activists for social and individual evolution.

During the time this style was in its infancy, Glenn heard the call and joined the mutual evolution. He began scrawling poems to be roared with thrash tempo rhythms; songs that wanted to transcend entertainment.

Glenn was nurtured on artists such as the STOOGES, LEONARD COHEN, the RAMONES, the SEX PISTOLS, STIFF LITTLE FINGERS, SHAM 69, and the CLASH. While he was shaping his vision, he was listening to CRASS (anarchist art punk band), and MOTORHEAD (seminal speed metal band). Glenn became convinced that rock could be a vehicle to help stimulate the transformation of one’s being to a higher stage of development, resulting in positive social behavior.

While he was forming a band to meet that aim, he began his missionary work and pasted the city with posters, like this one:

They started a buzz in the scene because of their striking images of real life horror accompanied by words that appeared to be scrawled by a mad mystic on the lam. Juxtaposed by another band poster, the lack of gig listing made one wonder, “What is this Ruin?…Is this a poem? …”

What is this symbol ?

That account of Ruin’s aboutness gives a sense of its soul at the creation. For more on the band as it developed, check out these interviews. Start with the touching tribute and interview by Steve Hart of the fanzine New Wave Chicken.

Here’s an interview of Glenn Wallis by Joseph Gervasi for his Loud!Fast!Philly! project chronicling the Philadelphia punk scene. (Might have to scroll down.) Here’s one with bass player Cordy Swope. And here’s one with singer Vosco Thom Adams.

Here is an interview with us about our adventure in the American punk underground, circa 1980s.

Here’s another one, with Glenn Wallis and Cordy Swope, at Seymour Magazine.

A write-up by by A.D. Amorosi, for The Philadelphia Inquirer: 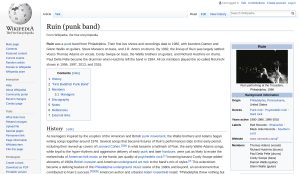